Blue-blooded Canberra gelding will take some stopping at Goulburn

A lightly raced three-year-old Canberra gelding is carrying the blood of one of the industry's greatest sires, a record-breaking Melbourne Cup winner, and plenty of owners' ambition when it travels up the freeway to Goulburn today for his latest challenge.

Carruthers, a big-striding bay who can finish hard, is by the unstoppable I Am Invincible out of Lightning Strikes, who is by the great 1990 Cup winner Kingston Rule. And fitting for the long list of owners, Kingston, of course, remains one of Canberra's most popular and fashionable inner suburbs. 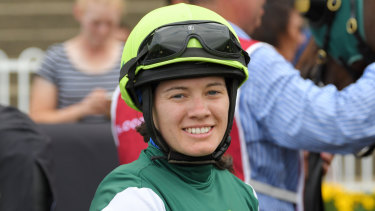 Fresh from a fast-finishing Class 2 win at this track two weeks ago, Carruthers will carry his biggest weight of 59kg in Thursday's Class 3 Handicap (Race 4) over 1200m for heady trainer Norm Gardner and in-form rider Jess Taylor.

And while he will get plenty of cover back in the field after drawing a nice barrier, he'll still need the breaks against a highly competitive field to improve his 33 per cent winning strike rate.

One of those is four-year-old Canberra gelding Romeo Vella, who draws alongside and comes off a strong all-the-way win at Albury last start. Leading Canberra trainer Matt Dale saddles up the returning Smart Missile-sired five-year-old Battle Fury, who normally comes to hand quickly, and Warwick Farm trainer Jason Coyle finds an attractive race for his consistent six-year-old Your Witness, who capped a run of close efforts by storming home to win a good quality BM 64 at Hawkesbury last start.

Elsewhere, they say weight can stop a train, but will it stop promising local four-year-old Pierino in the BM 58 Handicap (Race 7) over 1500m to close the card. The high-class charge of top local trainer Danny Williams has been allotted a whopping 64kg after some impressive and close-up runs in much stronger metro Highway company, and a nice closing effort in a BM 80 at Warwick Farm.

You could argue he's earned most of it, but there'll be no room for error giving rivals such as the promising three-year-old Soldier Of Love (58kg), who bolted in his maiden first-up at Bathurst; or the well-travelled and consistent Hawkesbury mare Tribuna (56kg) such a weight advantage.

And for punters looking for one over the odds, three-year-old Warwick Farm gelding Big Bad Bruce looks well over the mark third-up this prep in a Maiden (Race 6) over 1200m.