Former world No.1 Scott went into the final round of the Las Vegas tournament aiming to go low as he attempted to end his long title drought.

But a quadruple-bogey eight on the third hole ended any slim hope as he shot a 74, dropping 34 spots to be tied 42nd, a distant 11 strokes from winner Kevin Na who had his own final day dramas. 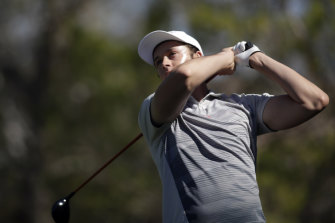 Na (70) coughed up a four-shot lead on the back nine (70) and tied fellow American Patrick Cantlay (68) at 23-under 261 before prevailing with a four-foot par putt at the second extra hole as Cantlay three-putted for bogey.

Cameron Smith surged home with a 65 to be the leading Australian, tied 13th at 17 under.

But 20-year-old Trent produced the most eye-catching performance by an Aussie in the tournament.

Big and strong, the laidback Queenslander is a college player for University of Las Vegas and he played a pre-event practice round with Scott, who also attended the university on scholarship.

He finished in a group including Australian Matt Jones (70), while Aaron Baddeley (70) was a further shot back.

Na's final-round cushion evaporated thanks to a triple-bogey at the 10th hole and a bogey at the par-five 16th after he hit his second shot into a pond.

"I hit a really bad tee shot, got unlucky and made a triple. All of a sudden I felt like I was the underdog but I'm a fighter," said Na after claiming his fourth tour title.

"Patrick is a great player and to be able to beat him down the stretch felt great. I've lost three playoffs. This is my first playoff win. I kept telling myself, 'This is a playoff I'm going to win'."