Solheim Cup: Angel Yin unable to practice as she waits for clubs to arrive 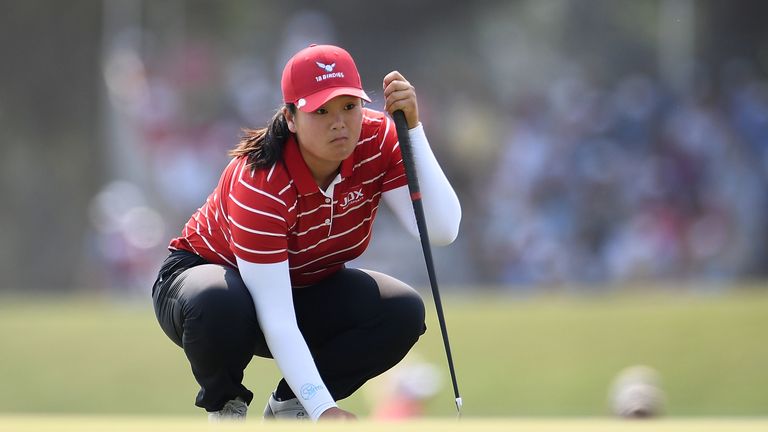 Team USA’s preparations for this week’s Solheim Cup have been disrupted further as Angel Yin awaits the arrival of her golf clubs.

Yin and Europe star Jodi Ewart Shadoff both arrived in Scotland on Sunday while their clubs remained in Dublin and, while Ewart Shadoff was reunited with her clubs early on Tuesday morning, Yin’s had yet to turn up at Gleneagles.

The young American, who impressed on her debut as an 18-year-old two years ago, was also forced to borrow clothing from team-mate Lizette Salas as her personal luggage also failed to reach its intended destination on time.

Yin was unable to take part in Tuesday morning’s practice round and was restricted to hitting a few shots alone on the range with clubs borrowed from the tour trucks on site.

The unfortunate situation for Yin is a further blow to the visiting team’s preparations, with captain Juli Inkster forced into a late change to her line-up when Stacy Lewis aggravated a back injury on Monday and was ruled out of the contest.

Lewis has been replaced by debutant Ally McDonald, who now becomes the sixth rookie on the American team, while only Salas, Lexi Thompson and Morgan Pressel have played a Solheim Cup in Europe.

There was better news for Inkster’s European counterpart Catriona Matthew, however, as Ewart Shadoff celebrated the safe arrival of her golf clubs in time for her practice round on Tuesday morning.

Ewart Shadoff played alongside Dutch rookie Anne van Dam and Carlota Ciganda as Matthew sent her team out in groups of three, perhaps a ploy to avoid giving away too many clues as to her intended pairings when the 16th edition of the tournament gets underway on Friday morning.