Joachim B Hansen took advantage of two late mistakes from Wilco Nienaber to land his maiden European Tour title at the Joburg Open.

Hansen trailed by three shots at the turn before he pulled level with three birdies in five holes, and he held his nerve to make par at 17 and 18 as Nienaber bogeyed both to hand the Dane a two-shot win.

Nienaber had looked a strong favourite to convert his overnight lead into victory after he made a confident start to his final round at Randpark Golf Club, extending his advantage with three consecutive birdies from the fourth, with Hansen matching his two at the fifth. 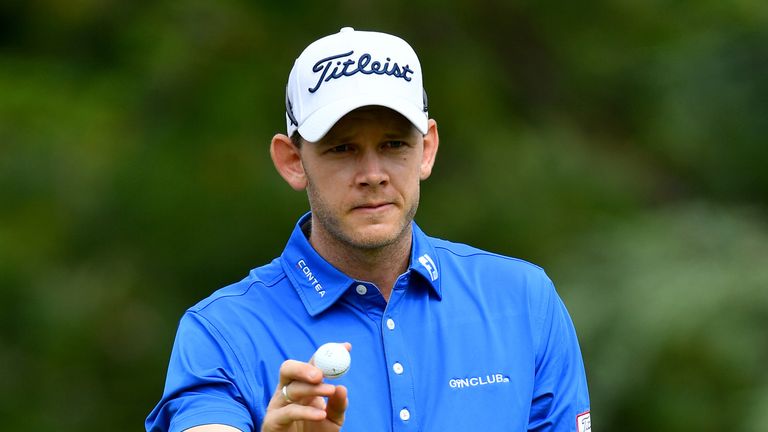 But the local hope struggled to create further chances around the turn and saw his lead vanish five holes into the back nine, with Hansen making birdies at 10, 12 and 14.

The top two did well to scramble pars at the 16th, and Nienaber then caught a huge break on the penultimate hole when he pulled his tee shot left of the target and appeared destined to find water, but his ball held up on the bank a few inches short of the hazard.

Nienaber was unable to capitalise on his good fortune, however, stabbing to 50 feet and, although he managed to two-putt to drop only one shot, Hansen’s par gave him a one-shot lead going up the last. Both made mistakes off the tee at the 18th, with Hansen pulling his drive into the left rough and Nienaber drilling a long-iron into the bunker on the right, from where he caught his second heavy and came up 50 yards short of the green.

Hansen gouged his approach into the front bunker and splashed out to six feet after Nienaber had been a little heavy-handed with his third, leaving himself 20 feet for par.

Nienaber’s putt to pile the pressure on the leader drifted wide-right, and Hansen stepped up to roll a tentative par-putt into the cup to cap a bogey-free 67, giving him a winning score of 19 under par.

“It’s quite emotional,” said Hansen. “Wilco got in front quite quick, by three shots, and we managed to stick to our game and our plan. He’s long, he’s got some good things with the game hitting it very far and very straight so we knew we had to go out and do our own and do the things we’ve done the first three days.

“We succeeded pretty well today. I putted really well, almost haven’t missed a putt inside six feet and holed a lot of long ones as well.”

A 70 was enough to ensure outright second for Nienaber on 17 under, with Shaun Norris winning the race for the final podium position after he came home in 32 to card a 66 and finish one behind his fellow South African.