Glenn Maxwell declared Australia's victory over England a vital stepping stone in the long road to the 2023 World Cup, after producing one of the finest innings of his career.

Coming off limited match practice after months of lockdown against a battle-hardened world champion on their home soil, the series win over Eoin Morgan's No.1 side ranks as one of Australia's finest performances in the 50-over arena outside of a World Cup. 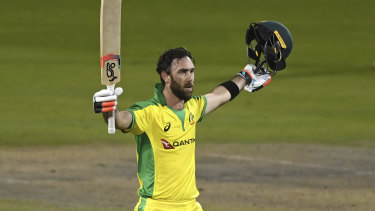 Glenn Maxwell played one of the best innings of his career in Australia’s win over England.Credit:Getty

His haul of 186 runs at 62 was enough to secure him player of the series honour for the first time in his 113-game career.

He credited close friend and captain Aaron Finch for giving him the "clarity" to play the crucial role in Australia's middle to lower order.

"Every time you get a chance to play in this Australian team you take whatever role you're given," Maxwell said. "The really good thing is, even in the lockdown period, I was training with Finchy and we were able to talk about my role and certain things.

"I just had so much clarity on what he expected of me in that role and I think that gave me really good clarity out there."

Rivals have targeted Maxwell with the short ball but his game held up against an attack containing speed demons Jofra Archer and Mark Wood.

"I'm trusting my technique at the moment. It doesn't look, I suppose, traditional; it's a bit different being a bit opened-up but I just feel really calm at the crease," Maxwell said.

"I think the way I played fast-bowling's been a massive change in my game; I'm a lot more still at the crease, there's not as much moving around. I think that's been a key to a little bit more success."

The success over the pacesetters in the 50-over game has given Australia a huge boost in the build-up to the next World Cup, Maxwell said.

"To take them down on home soil when they have been playing pretty consistent cricket over here and for us to start our summer off after a long time in lockdown with a series win against them was pretty incredible for this group," Maxwell said. "We've worked so hard since coming together and it is just great that everyone could do the work back at home and when we got over here throughout the practice matches and training to get ourselves up to take on the world's best and beat them on their home soil."

Maxwell's heroics meant Mitchell Starc missed player of the match honours despite his late cameo with the bat and wickets with the first two balls of the game.

EFL clubs could stop playing in weeks unless they get bailout