Australian captain Tim Paine has been cleared to play in next week's first Test against New Zealand, after he bruised his right ring finger this week.

Paine hurt himself while wicketkeeping during the second Test against Pakistan in Adelaide but played out the game. 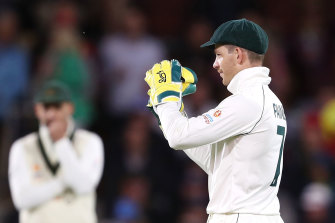 Despite bruising his finger, Tim Paine is expected to face the Black Caps in Perth next week. Credit:Getty Images

The national selectors had sought clarity before confirming Paine's selection in the 13-man squad to face the Black Caps. He has bruising and has been in contact with medical staff this week. However, with the Perth day-night Test not starting until Thursday, Paine is seen as a certain starter.

Fortunately for Paine, he did not re-injure the right index finger that has caused him significant grief through his career and almost led to his retirement.

Fast bowler Mitchell Starc will also make the trip to Perth on Saturday, having battled a sore toe and appeared to role his ankle in the first innings in Adelaide. Starc tore skin under the toe and later said "it took a few balls to get that pain threshold away".

Having managed only the one Ashes Test, with Australia demanding a tighter, more disciplined line of attack, Starc was at his best against Pakistan, claiming a series haul of 14-238 at an average of 17.00. Pakistan, by comparison, had managed only 13 Australian wickets combined through the two Tests.

The Australians will have their first training session in Perth on Monday.

That the opening Test will also be played with a pink ball could give the home side an advantage, having already had to deal with its nuances in Adelaide.

Spinner Nathan Lyon said the Australians were focused on maintaining their momentum. Lyon has happy memories of Perth, having been named man of the match with match figures of 8-106, in a 146-run victory over India at Perth Stadium last year.

"It’s fantastic that we have the chance to play another day-night test within the space of a few weeks. The fact that we are now able to play the first ever day-night game in Perth is great news for fans," he said on Friday.

"The team has done very well with the pink ball in the past and, hopefully, our form continues."

Officials in Perth hope that strong form will attract an attendance of about 80,000 over the opening four days, with the Western Australian Cricket Association keen to turn this fixture into a major annual event. Attendances were disappointing for the Gabba Test (45,000) and in Adelaide (91,879) in the two Tests against Pakistan.