The Japanese international signed with the NBL as he wants to blaze a new trail for his countrymen by developing at home in the B.League before chasing opportunities overseas.

The 24-year-old, 196-centimetre wing brings lightning speed and impressive hops to United, who are using him as an impact player who can play disruptive defence, score a few baskets and throwdown dunks in transition.

Japanese basketball is fast developing, with Rui Hachimura and Yuta Watanabe in the NBA after playing in US college basketball.

Baba wants to follow them but do it his own way and making an impact in the NBL is a key part of his plan.

“I’m completely different to them,” Baba said. “They graduated American college but I graduated Japanese college and played two years in the professional league. I feel I am a kind of pioneer for Japanese basketball players.

“I want to give a dream to the next generation so they can play in foreign countries. I want to prove this.”

Baba revealed his time in Melbourne has been far more enjoyable than his first foray overseas last year with NBA G-League club Texas Legends, where he ran full-speed into language, cultural and ambition difficulties.

G-League players are only in the league to try and make the NBA and even the most hardened professionals find it difficult to adjust when most players are looking out for themselves.

“Everything was new for me,” Baba said. “It was harder to find food, also it was a tough culture. But once I got on the court it was just basketball and we could communicate on the court.

“This is not my personality. It was stressful, not good for me. But here I can enjoy everything.

“I didn’t notice this when I was playing in the G-League but once I got to this team it is completely different.″⁣ 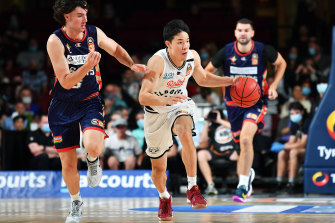 Yudai Baba on the run for Melbourne United in their clash with the Adelaide 36ers earlier this month.Credit:Getty Images

Baba played in 41 games then taking his experiences to Melbourne where United have signed him under their special restricted-player rule for Asian talents.

The Legends had an assistant coach who spoke Japanese, which helped Baba to understand training but he didn’t learn enough English to be self-sufficient so he told Melbourne coach Dean Vickerman he didn’t want a translator.

Instead, he completed an in-person English class when he first arrived and continues to spend an hour each day on language skills.

His teammates have helped him with Australian slang, local basketball terms and other words.

“Everyone is kind to me. They talk to me, help me, and it’s why I’m getting better and can be confident in myself,” Baba said.

United teammate Mitch McCarron said Baba was beginning to come into his own.

“He’s a legend,” McCarron said. “He has started to open up now and he speaks English really well. He was just a bit shy and not trying some of the words. Now he is more comfortable.

“He’s also super smart. As soon as he learns something he applies it right away. He will do really well this year.”

Baba’s dream is to make the NBA but his legacy may well be that more NBL sides look to chase elite Asian players who want to play overseas.

For now, Baba is deeply focused on helping the highly rated United side win an NBL title, the fast style of the NBL suits Baba and his hard work off the court is helping him fit in on it.

“This team’s strengths are running and running at fast pace and this is one of my strengths also,” Baba said. “This style fits me, I’m comfortable.”