Ben Simmons has missed out on being a starter at next month's NBA All-Star game.

A fan, player and media vote selected the Atlanta Hawks' Trae Young and Boston Celtics' Kemba Walker as the starting guards from the eastern conference. 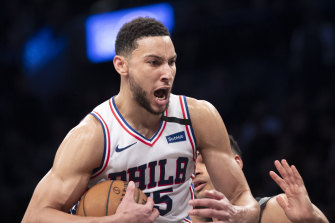 Ben Simmons is expected to get a reserve spot.Credit:AP

NBA coaches will select the reserves next week, with Australian-born Philadelphia 76ers' star Simmons expected to earn a spot.

Simmons made his All-Star debut last year as a reserve.

The two other east frontcourt starters are the Toronto Raptors' Pascal Siakam and 76ers' Joel Embiid.

The All-Star game will be played in Chicago on February 16.