The New Orleans Pelicans won the draft lottery and will pick first in the 2019 NBA Draft on June 20.

The draw gives the Pelicans – who had only a 6 per cent chance of winning – the inside track to select Duke freshman forward Zion Williamson at No. 1. 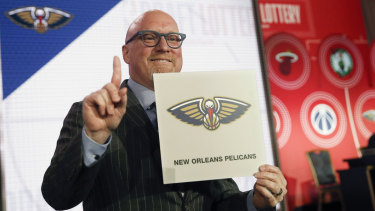 The franchise had the top pick in 2012, when it selected Anthony Davis, a six-time All-Star who requested a trade in January.

"I think it's just another positive event for us in what I hope will be several that we stack together," said David Griffin, the Pelicans' executive vice president of basketball operations.

"I'm really excited for our fan base and we've got a lot of work to do, but this is a good start."

Results of the revamped lottery were revealed in Chicago on Wednesday morning (AEDT), two days before prospects take part in the draft combine on the city's south side.

The No. 2 pick went to the Memphis Grizzlies, followed in order by the New York Knicks, the Los Angeles Lakers, the Cleveland Cavaliers and the Phoenix Suns.

The Chicago Bulls will pick seventh, followed in order by the Atlanta Hawks, the Washington Wizards, Atlanta, the Minnesota Timberwolves, the Charlotte Hornets, the Miami Heat and the Boston Celtics.

Immediate speculation was that the Pelicans winning the top pick could influence what Davis does next.

Griffin, hired by the Pelicans in April, told NBA TV he believes that management can convince Davis to stay. Davis has a player option to become a free agent after next season but also could sign a super-max extension with New Orleans.

"There are a lot reasons for him to believe that this will be different," Griffin said.

"What it starts with is just us doing what we say we're going to do, one step at a time. Over time, I think he's going to see there is a trust level that he should have in us.

"I believe strongly he has always wanted to be part of the market, but, understandably, the kid wants to win." 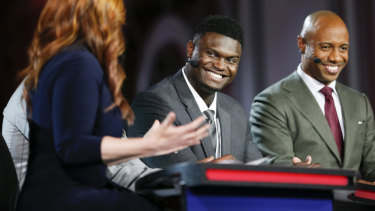 Under rewritten lottery rules designed to prevent tanking, the Knicks, Cavaliers and Suns held equal 14 per cent odds to select No. 1 by virtue of having the three worst regular-season records. Bygone lottery guidelines would have granted New York a 25 per cent chance as a result of an NBA-worst 17-65 record in 2018-19.

The Knicks were assured of being awarded no worse than the fifth overall pick, and they wound up at No. 3.

The Knicks have drafted first only twice since 1965, including selecting Patrick Ewing – who represented the team in Chicago on Wednesday – out of Georgetown in a top 10 that included Chris Mullin (seventh, Golden State Warriors), Detlef Schrempf (eighth, Dallas Mavericks) and Charles Oakley (ninth, Cleveland Cavaliers).

Williamson, the consensus college player of the year as a freshman last season, is the overwhelming favourite to be the No. 1 pick.

"Just my will to win," he said of what he will bring to his new team. "Whatever that team needs me to do, I'm going to be able to do it."