The FIBA Women’s World Cup starts in Sydney on Thursday with Team USA the favourites and a host of nations, including Lauren Jackson’s Australian Opals, looking to cause an upset.

The event is held every four years and requires teams to qualify via regional games and then special qualification tournaments with 12 nations advancing to the main event. 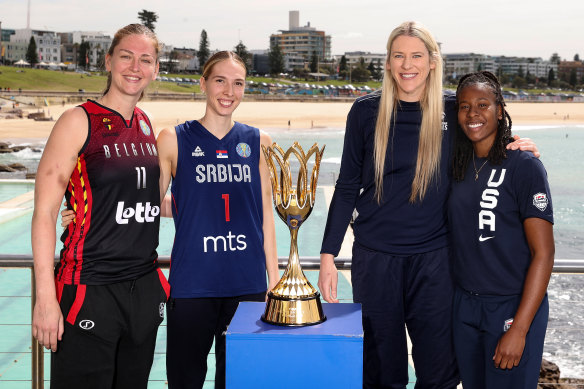 Two qualified nations were replaced with Russia banned from competition by FIBA in March due to the invasion of Ukraine while Nigeria’s government withdrew it from FIBA competition in June with Puerto Rico and Mali taking their places.

How it works: Two groups of six teams play five group games, with the top four in each group qualifying for knockout quarter-finals. The four winners make the semi-finals then the two semi-final winners play for the gold and silver medals while the two losing sides play for bronze. All this will be completed in 10 exhausting days.

How to watch: Ticketek has tickets for games starting from $25 for an adult and $15 for a concession with games at the SuperDome and Olympic Park Sports Centre. ESPN will show every game live.

Past winners: The USA is the dominant force in women’s basketball. The Americans have won 10 out of 18 world cups including seven out of the last nine. Australia, led by Lauren Jackson and Penny Taylor, won the event in 2006 and Brazil won in 1994 when Sydney last hosted.

Group A: USA, Belgium, China, Bosnia and Herzegovina, Puerto Rico, Korea: USA could be without WNBA MVP A’Ja Wilson, Kelsey Plum and Chelsea Gray for the first game or two after they won the WNBA title with Las Vegas Aces on Tuesday (AEST) but USA should win this rather weak group in a canter. Belgium and China could contend for medals.

Group B: Australia, France, Serbia, Japan, Mali, Canada: This is the toughest group. France, Serbia and Japan all made the medal rounds in Tokyo while the Opals and Canada are top-five ranked nations. Whoever finishes third and fourth could face USA before the final.

The Opals: In the 13 months since Australia was bundled out of the Tokyo Olympics following Liz Cambage’s exit days before the Games, the national team has rebooted itself with some tough conversations and a focus on team culture. Lauren Jackson’s return at age 41 has been an unexpected bonus, but this group has bonded tightly under the captaincy of Tess Madgen and the desire to win at home in Sydney. Ezi Magbegor, Sami Whitcomb and Rebecca Allen all shape as key players while wins over France, Belgium and China in lead-up games show something is working. Now to do it when the bright lights are on.

The quote: “We have worked so hard on culture and bringing us together as a team,” Forward Sara Blicavs said. “I think it will give us a little edge over other teams. I honestly think we can medal, if not take the gold medal.”

The jersey: The Opals will wear a “home” green jersey which will, for the first time, have an indigenous design created by Kuku Yalanji, Kulkagal and Erub Mer artist Daniel O’Shane and inspired by Torres Strait Island printmakers. The team also has a gold jersey.

The comeback: Lauren Jackson’s comeback at 41 is the feel-good story of the year in basketball and don’t rule her out as a difference-maker in her fifth World Cup. Jackson first made her mark as an Opal at the Sydney Olympics, now perhaps she can make her international swan song in the same city. She will play every minute she can get and could be a match-winner.

The superstar: USA forward Breanna Stewart has taken all before her at WNBA and Olympic level, and now she has the chance to lead her nation as legends Diana Taurusi (quad injury) and Sue Bird (retirement) aren’t leading the side. ‘Stewie’ can score from all over the court and leads by example at the defensive end. Off the court, she has achieved one of the rarest honours in women’s hoops with Puma releasing her own signature shoe to coincide with the tournament.

The injury: French playmaker Marine Johannes is one of the world’s most entertaining and creative players but sadly, she has gone down with a thigh injury and has been ruled out of the tournament. France is already without captain Sandrine Gruda (calf injury) and WNBA guard Bria Hartley but Johannes’ absence may cut the deepest as she can bring neutral fans into games with her passing and scoring.

Griner not forgotten: USA centre Brittney Griner should be on court in Sydney chasing her third World Cup gold medal. Instead, she is beginning a nine-year jail term in Russia after traces of cannabis oil were found on an item in her luggage in February. Griner was playing in Russia’s lucrative women’s league at the time. The WNBA and its players continue to lobby for Griner to be released. Stewart tweets a daily reminder that her friend remains “wrongfully detained”.

Roy Ward’s prediction: The USA is less organised and experienced than in past years but as long as their Aces stars makes it to Sydney after their post-title celebrations, they will claim world cup number 11. The Opals are talented and connected enough to make the final but they have to escape their group first. Look for Australia to take silver and Japan or Serbia the bronze.