Melbourne United and South East Melbourne Phoenix claimed wins to close out their NBL Blitz campaigns in Hobart on Sunday.

League debutantes the Phoenix won both their Blitz games including a 102-95 win over New Zealand Breakers on Sunday, while Melbourne United ended the event with a 110-91 victory over Illawarra. 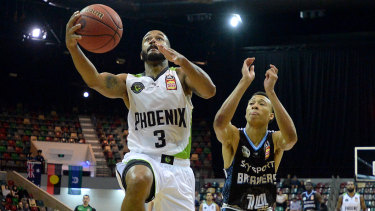 Blitzing it: John Roberson of the Phoenix drives to basket during the pre-season match against the NZ Breakers at Derwent Entertainment Centre in Hobart.Credit:Getty Images

The Hawks were without teenager star LaMelo Ball (sore back), centre Josh Boone and lost NBA import Aaron Brooks in the third term after he was ejected for picking up a technical foul and an unsportsmanlike foul.

Roberson shot 31 points in the first game and added 16 points and six steals in Sunday's win.

"MVP honours are nice but it's more important we carry this moment into the season," Roberson said. 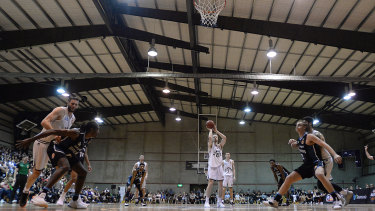 Melbourne United's David Barlow won the three-point shootout while the Brisbane Bullets claimed overall honours and the Loggins-Bruton Trophy following wins over the NBL1 All-Stars and the Adelaide 36ers.

Phoenix guard Kyle Adnam said his side showed their chemistry was building by holding off a fast-finishing Breakers without star forward Mitch Creek and veteran guard Adam Gibson who both should be fit for round one. 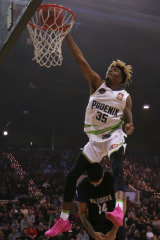 Jump to it: Phoenix player Terry Armstrong took the honours in the slam dunk contest.Credit:Getty Images

"I think we did a really good job of executing and the big one for me was us holding our nerve, they had a really good run in the third where we could have folded and let them get back in front," Adnam said.

Melbourne United were without Boomers guard Chris Goulding, who was sidelined by a calf issue picked up during the FIBA World Cup, while import Casey Prather suited up on Sunday after missing their first game due to illness.

Melbourne coach Dean Vickerman said his side played with much higher pace and tempo on Sunday while also creating openings for each other.

United have had five players and two assistant coaches away at the World Cup with the Australian and New Zealand teams so they face a tight time-frame to get ready for the season-opener against the Phoenix at Melbourne Arena on October 3.

They have games against Perth Wildcats and Adelaide 36ers in the next week to give their returning players more time on court.

"It's frustrating for me as we have so much teaching to do," Vickerman said.

"We see things happening on the floor that should improve. We definitely scheduled those two fixtures knowing they might be our only games with our full squad."

Roy Ward travelled to Hobart courtesy of the NBL.