An opportunity beckons for Brisbane Bullets to surge back into NBL finals reckoning after dismantling Illawarra Hawks 101-91 in their round 10 clash at Nissan Arena.

A season-high home crowd of 5276 waited expectantly for the Bullets to take advantage of an undermanned Illawarra. 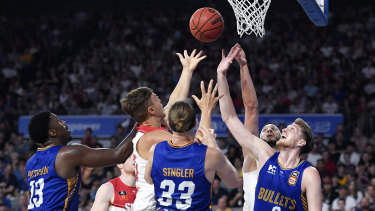 The Bullets and Hawks compete for the ball during the round 10 NBL match.Credit:Getty Images

It took them three quarters to get going but they eventually did to steady their season at six wins from 13 games.

Facing the eighth-placed New Zealand Breakers away on Monday should be a golden chance to advance even closer to the pace setters.

Consecutive wins have been difficult for Brisbane but they should feel optimistic as they powered home on the back of heavy contributions from import Lamar Patterson (19 points, six assists) and centre Matt Hodgson (14 points, nine rebounds).

Representatives of NBA clubs Toronto Raptors and Orlando Magic at the game to assess Lamelo Ball were left with blank notebooks when the teenager sat out with a foot injury.

There was nothing to excite them from a forgettable first half blighted by fouls and low scoring percentage.

Brisbane looked in control without fully pressing their advantage on the scoreboard until late in the half when Cam Gliddon weaved and spun his way past multiple defenders deep into the paint.

The space he created opened room for Hodgson to soar high above the ring for a powerful reverse dunk.

Hawks captain Todd Blanchfield (17 points) and guard Angus Glover (17) kept the Bullets from running away with the game before three-quarter time.

Glover had a tough defensive job to contain the Bullets perimeter shooters but the Illawarra product showed much spunk to fill the absence left by Ball.