Centre Bogut was the competition's MVP in his first season in 2018-19 but is down in most statistical categories in his second year, when he's been playing significantly fewer minutes. 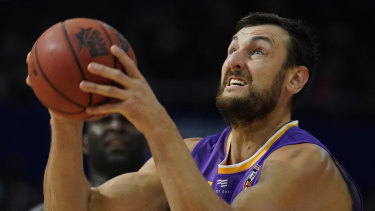 Andrew Bogut shoots for the basket during the victory over the Cairns Taipans at Qudos Bank Arena.Credit:Getty

Point guard Ware, the King's prize off-season recruit, is averaging more points per game this season than any time since his first NBL campaign in 2016-17, but going into Saturday's game against Cairns was shooting at just 29 per cent from three-point range, down from 35 last season.

Bogut went from the 2018-19 NBL into the NBA play-offs with Golden State Warriors and the Boomers' World Cup campaign before starting another NBL season.

"I don't think he's struggling, if anything. I've seen him more examples lately of him looking like 27-year-old Boges," Weaver said following the 92-83 win over Cairns, in which Bogut tallied six points and eight rebounds in just under 20 minutes.

"There were stretches last week in practice that nobody could do anything with him, he was totally dominant.

"We as a group, and he's part of it of course, are trying to make sure that he's growing and peaking at the right time.

"I'll have to see how he came out of this game but he's a warrior and absolutely one of the most tough-minded and physically tough players I've ever been around."

Weaver was also very supportive of Ware, who was joint top scorer for the NBL ladder leaders on Saturday, when he missed six of his 10 three-point attempts.

"I feel like he has, particularly in the last several weeks, doggedly played big minutes and guarded often the best perimeter player and driven and finished," Weaver said. 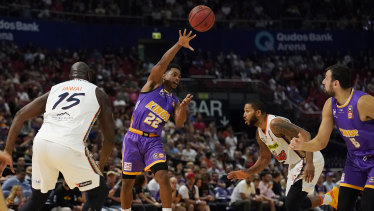 Casper Ware goes over the top against the Taipans.Credit:Getty

"The only thing that hasn't happened is his three hasn't gone down the way that we're used to it going down.

"I know that he's frustrated that some of those three's haven't dropped, and what I love about him is that his approach doesn't change, he works the same way the days he makes shots and when he misses shots.

"His game is so much more than just shot-making."