Bolden was among the Boomers' best players in the team's win over Canada in Perth on Saturday night, but on Sunday night Basketball Australia released a statement saying the Philadelphia 76ers power forward had withdrawn with his coach's support to deal with a personal matter in the United States. 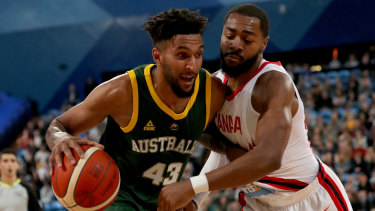 While other NBA players have withdrawn from the World Cup to focus on their US campaigns, Bolden has been steadfast in his commitment to the Boomers.

No further information was provided and no replacement named, with Boomers coach Andrej Lemanis to consult with his coaching staff before calling in a new player.

Rio Olympic power forward Brock Motum is one candidate, although Lemanis said he would take time to look over his options and see what the team needed most. A small forward like Deng Adel could also be an option, and would be a boost for the squad in terms of athleticism and versatility. 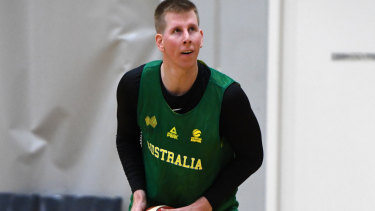 Brock Motum of the Australian Boomers squad during a training session at Melbourne Sports and Aquatic Centre in August.Credit:AAP

Lemanis originally left out Motum due to his desire to take advantage of Nick Kay's defensive talents as a back-up power forward instead of Motum's scoring skills. Adel was left out due to his need to spent more time with the Boomers and learn the team's complicated offensive system.

"My first thought is always with the player in these situations – having to withdraw from the national team is tough for anyone," he said.

"From a team perspective, the timing is sub-optimal, but again, we are very fortunate to have the depth of talent we have in this country available to take up this opportunity.

"Whilst it can feel like we need to make a quick decision, the most important thing is to bring in the player that best compliments the other skill sets we have on the team.

"The Canada series has allowed us to understand a little more about who we are as a team."

The statement said the Boomers hoped to have a replacement player with the side in time for the series with the USA which begins at Marvel Stadium on Thursday night.