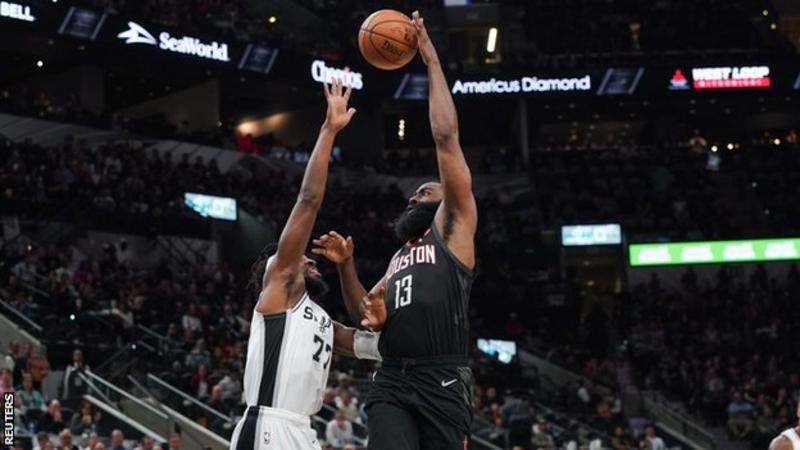 The Houston Rockets suffered a controversial 135-133 defeat by the San Antonio Spurs in Texas after a James Harden dunk was incorrectly ruled out.

Officials judged the ball had bounced out of the basket for Harden’s breakaway two-pointer in the fourth quarter, with the Rockets ahead 102-89.

The home side then blew a 10-point lead with four minutes of normal time to play to lose after double overtime.

The crew chief added: “We have looked at the play and Harden dunked it so hard that the net carried back over the rim a second time and should have been a successful field goal.”

At the time, the Rockets protested on the sidelines, but failed to call for a video review of the play within the 30-second window allowed.

It meant Harden’s 50-point personal tally was in vain.

Shooting guard Lonnie Walker was the standout performer for the Spurs, coming off the bench to score 28 points and four rebounds.

Rockets head coach Mike D’Antoni criticised his team for throwing away a lead, which was as big as 22 points at one stage, saying his side “quit playing defence”, before adding he had “no idea and didn’t get an explanation” as to why Harden’s dunk was chalked off.

Houston are fifth in the Western Conference and San Antonio 12th, after their eighth win of the season.