How Sydney’s injuries pushed them to a 41-year first

Kings star Kevin Lisch says Sydney's response to their run of injuries this season has been key to their success as his side looks to become the first team in the 41-year history of the NBL to lead the competition for the entire campaign.

Lisch said the only reason the record was made possible was due to the collective resilience of his side during the dark times, with the Kings losing big names Andrew Bogut and Didi Louzada for significant portions of the season.

"It hasn't been easy going all year," Lisch said. "We've had guys coming in and out, and we've done a good job of adapting to that and that's just the reality of sports. A lot of times the teams that can adapt are the ones that are successful at the end." 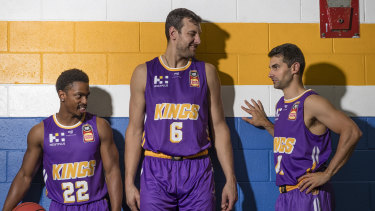 Lisch was also sidelined after round two with a serious ankle fracture and returned to the court for the first time at the start of February in an effort to bolster their injury-ridden line-up for a clash with their fierce rivals the Perth Wildcats.

"The fact of the matter is we have such a talented team that it's kind of just like a tag team in some regards," he said. "I'm pretty happy and content just being able to put my basketball shoes on during the game instead of dress shoes."

Last week, Sydney edged out the Phoenix 99-96 with Bogut, Louzada and Craig Moller all missing the clash through injury. Bogut, 35, has been sidelined nursing a bad back complaint for three of their past four games.

The Kings can cement their place in history when they take on the Hawks at Qudos Bank Arena on Friday night. 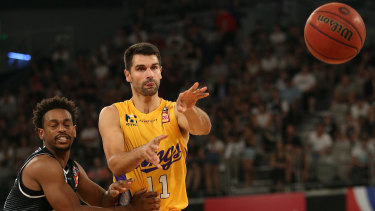 Kevin Lisch believes the KIngs can go all the way this season.Credit:AAP

"Everyone, the coaches and the players, have created such a good environment that whether you are on the court or not you have your role to do," Lisch said. "I did miss a lot of time, but I still get a chance to get back on the court and be in the play-offs race.

"My teammates and coaches have made this an enjoyable experience, whether I was out rehabbing or out playing."

Bogut and Lisch are set to make an appearance, but will both be sidelined for the majority of the game to keep them fit for the finals.

Despite his injury, Lisch said he is feeling "stronger" than ever before and is hoping to have more minutes on the court during the finals.

"I think it's just a matter of finding your rhythm again and finding where you fit in," he said. "It's definitely more just a rhythm thing then a confidence thing from being out."

Barcelona 'prepared to use Junior Firpo in Lautaro Martinez deal'