Flyers, Boomers ready for top of the table clash

It's too early to know for sure but Sunday's WNBL clash between the Southside Flyers and Melbourne Boomers at the State Basketball Centre could be a grand final preview.

The Flyers (13-3 win-loss) and Boomers (12-4) are first and second on the ladder with three weeks left in the regular season.

Sunday will be their third and last regular season meeting after the Flyers won the first two games.

The Boomers are desperate to take a win and extend their four-game winning streak, after beating likely semi-final side Adelaide Lightning 74-69 in Adelaide on Friday night, although they will be closely watching imports Sophie Cunningham and Lindsay Allen, who battled through injuries to finish the game.

Boomers officials are expecting a close to capacity crowd and have asked supporters to buy their tickets online to avoid disappointment. 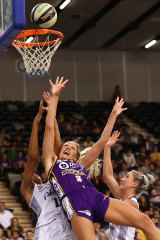 Off balance: Sophie Cunningham gets knocked off course on her way to a lay-up for the Boomers.Credit:Getty Images

After a loss to Adelaide last Sunday, the Flyers have spent this week knuckling down on their defence as that game reminded them how a championship season could be ruined by a bad game.

Flyers coach Cheryl Chambers said reigning champions Canberra Capitals and the Lightning remain right up among the title contenders. But she did appreciate what it could mean to boosting the profile of the WNBL, with two the Melbourne sides firing.

The last WNBL grand final between the two Victorian teams was in 2011-2012 between the Dandenong Rangers (now Southside Flyers) and Bulleen Boomers (now Melbourne Boomers).

"It would be wonderful for how we could market women's basketball but, having said that, Canberra and Adelaide are still really good teams and there is a lot of water to go under the bridge," Chambers said.

The Flyers responded well to their loss last round and stars like Jenna O'Hea and Mercedes Russell were doing well after struggling with injuries at Christmas.

"We sat down and watched the tape on Monday and the room was silent," Chambers said of her usually jovial team.

"There was a lot of reasons and excuses why we didn't defend well, the proof will be in the pudding as to whether we improve when we play on Sunday."

Boomers coach Guy Molloy hopes Cunningham can find some luck after fighting through the latest of her health concerns to star on Friday night.

Cunningham spent Wednesday night in hospital due to stomach bug but managed to prove her fitness in time to fly to Adelaide and score an equal season-high 18 points in their win over Lightning.

The first year import has battled an ankle issue and a nasty fall, which saw her miss a game with concussion and back soreness, so Molloy hopes the Phoenix Mercury forward can go from strength to strength in the closing weeks of the WNBL season.

"She has had a horrible run. She had an awful fall in our last [previous] game against Adelaide, she was tipped up in mid-air and landed on her back and her head," Molloy said.

"She's had an ankle problem and people wouldn't know that she had some stomach problems and didn't travel with the team this game.

"She spent the night before last in hospital then jumped on a plane late Thursday night to join the team and play.

"She's a real warrior and the team is so much better for the contribution and she just needs a bit of luck to go her way."

Allen took a bump midway through Friday's game but managed to play it out despite not being 100 per cent.

"She didn't have much explosiveness late in the game, hopefully she will pull up OK on Sunday," Molloy said.

Boomers guard Maddie Garrick said her side wanted to show they can.

"We've lost to them twice already so it would be nice to get some revenge," Garrick said.

"I think we're in good form and it will be a really good test for us going into the finals."