Four-time NBL championship winner Alex Pledger says there are positive signs that he can overcome a diagnosis of colorectal cancer and return to basketball.

The 33-year-old centre has enjoyed a decorated 263-game career with New Zealand Breakers and Melbourne United, while also being a long-time member of the New Zealand Tall Blacks national team. 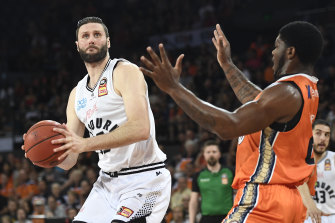 But Pledger didn’t join a team this season after playing 50 games in two seasons for Melbourne United.

Instead Pledger spent five months trying to find out why he was feeling unwell, undertaking a series of inconclusive tests and medical visits.

Pledger revealed his diagnosis on Monday via a statement, which also explained a trip to hospital last week that led to specialists finding he had colorectal cancer.

Pledger will begin radiotherapy next week, with initial plans for it to run for six weeks, while his family and his fiancee Bailee Moore will be supporting him.

“Obviously this has been a shock,” Pledger said. “Early tests are showing positive signs and I’m feeling really good about our plan to beat this.

“I feel extremely lucky that this has been discovered at the stage that it has.

“I’m really grateful for the medical team, my family and the wonderful support I’m already receiving from the basketball community.

“I’m looking forward to the future and hopefully getting back on court.”

Pledger thanked those who had already reached out to offer support and he asked for privacy while he undergoes his treatment.

Melbourne United shared Pledger’s statement and sent best wishes to the player and his family.