A three-point barrage from import Didi Louzada has inspired NBL leaders Sydney to a 104-85 victory over defending champions Perth in their top-of-the-table clash.

Louzada hit seven of his 11 long-range attempts on Sunday at Qudos Bank Arena, including three in a row in a stunning third-quarter burst. 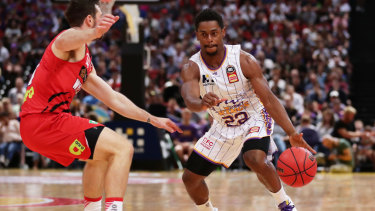 The No.35 pick in this year's NBA draft finished the game with a career-high 28 points to help the Kings to maintain top spot on the ladder.

Sydney's evening was soured, however, when Louzada limped off the court with cramps midway through the final quarter. He finished with six rebounds, two assists and two steals. 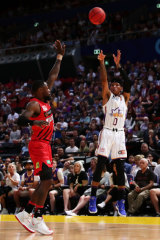 Didi Louzada shot 7 from 11 outside in a match-dominating performance. Credit:Getty

The 20-year-old swingman was outpointed by Wildcats star Bryce Cotton, who single-handedly kept his team in the contest with 36 points. But the former league MVP was left to fight the battle alone with big man Nick Kay the only other Perth player to reach double figures.

For Sydney, star guard Casper Ware chimed in with 25 points, while Brad Newley and Jae'Sean Tate added 23 and 13 respectively.

Sydney had the jump on Perth early off the back of hot shooting by Louzada, who scored eight points in a closely fought opening quarter. His scoring was matched by the class of Cotton, who connected three times from long range on his way to 18 first-half points.

Only a buzzer-beating heave from Louzada separated the two teams at halftime. That all changed in an explosive third period from the home side when Louzada blew the game open with his consecutive treys.

By the end of the quarter, Sydney's lead blew out to 15 points.

His dead-eye shooting proved contagious, with Newley, Ware, Tate and Shaun Bruce raining threes on their stunned counterparts in the second half.