In the battle of the WNBL’s biggest star against one of its brightest rising stars the veteran won out, with Liz Cambage’s Southside Flyers easily beating Shyla Heal’s Townsville Fire 94-70 on Saturday.

The clash between the dominating Cambage and the up-and-coming Heal – the daughter of Australian basketball royalty in Shane Heal – loomed as one of the most intriguing subplots in this weekend of WNBL games.

And while the pair did not go head-to-head given positional and size differences they did play leading roles for their teams on the court in Cairns. 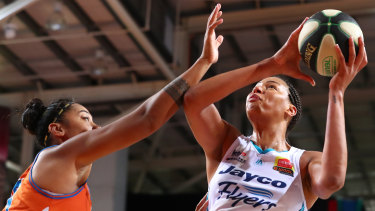 In the end Cambage played to a higher level over four quarters, better supported by her teammates. Heal had an impressive first half scoring 15 points, but she spent time on the bench in the third term after copping a stray elbow to the chest, and wasn’t the same upon return to the floor.

Aimie Clydesdale shot nine points and provided four assists for the Flyers and said they would have their work cut out for them having to play again on Sunday.

"They're such a high energy team," she said. "For us it was all about the defensive end

"We lost momentum a little but but we managed to bring it back which is really pleasing.

"They're quick in the guard department … then they're big on the inside too.

"We can put points on the board but we need to make sure we are stopping teams on the other end."