What was once unthinkable is now reality: Australia have beaten Team USA in men's basketball.

The USA have emerged victorious from all 26 previous meetings between the two nations, and many would have tipped Saturday's game to go the same way.

Instead, Australian NBA stars Patty Mills and Andrew Bogut showed why they are NBA championship winners, inspiring a third-quarter run to take the lead and then steering the team home 98-94 in front of 52,079 fans who roared their approval. 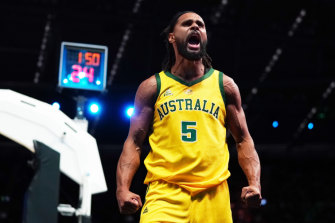 Mills was the hero with 30 points, while Bogut's game was far more influential than his 16 points and nine rebounds showed on the stat sheet.

Yes, it was only an exhibition game and the FIBA World Cup is still a week or so away, but this win has meaning to a nation where we can produce so many NBA players but lose just as many to domestic codes.

The Boomers will now chase their first medal at men's international level when the World Cup begins in China on August 31, while USA will take plenty from this loss too.

"We take a lot of pride in representing this country," Mills said post game.

"All of us teammate are best friends and this was an opportunity tonight to put on a show. 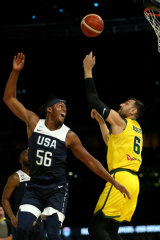 "We have always been the underdogs, but so be it."

For the second-straight game the crowd was a new Australian basketball record of 52,079 supporters, making it 102,297 fans over two games – and this time fans saw the Boomers push the World Cup favourites right to the wire.

Not even social media horror stories of plastic chairs and distant views stopped Saturday's crowd from turning up and raising the volume in the second half as Bogut and  Mills led a comeback that saw the home side take the lead at three-quarter time and well into the final term.

Chants of "defence, defence" echoed through a stadium best known for Australian rules football as the Boomers tried to claim their first win over the USA – the current American side's first loss since the 2006 FIBA World Championships in Greece.

Not even the angriest of Russell Crowe tweets could ruin the drama of the final term, especially as the USA missed their last shot and the Boomers pulled in the rebound.

This performance was everything this Australian Boomers team wants to be, as Bogut, Aron Baynes and Jock Landale made plays inside while Joe Ingles, Mills and Matthew Dellavedova made defensive plays and key baskets.

Mills nailed a three-pointer off the backboard with under three minutes to play, putting the Boomers up 91-87. USA coach Gregg Popovich, who coaches Mills in the NBA, was screaming at his defender to step up and take away Mills' room, but he was able to let it fly.

USA forward Harrison Barnes (20 points) was a constant issue for the Boomers after moving into the starting line-up, while Popovich brought star guard Kemba Walker off the bench and he was just as damaging as when he was starting with 22 points.

But in the final term it was Mills who took the lead, nailing some big threes and ending the contest.