Melbourne Boomers centre Ezi Magbegor stepped up to make sure her side took a win in Sydney on Saturday after two heartbreaking losses.

The Boomers beat a heavily undermanned Sydney University Flames 76-62 at Brydens Stadium as Magbegor continued her hot-scoring streak with a game-high 25 points. 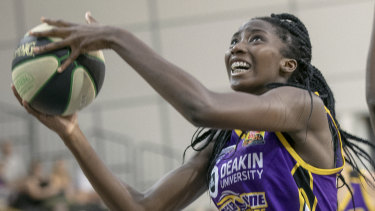 The Flames injured woes appeared to continue with star guard Ally Wilson forced off in the last term while feeling for her knee. Later she was moving around.

The team already has starters Colleen Planeta, Alice Kunek and Tahlia Tupaea out injured after the most frustrating of campaigns. Still, the home side were courageous and pushed the stronger Boomers for much of the game until Magbegor, Cayla George (14 points, eight rebounds, five assists) and Maddie Garrick (13 points, seven assists) helped them run away with it in the final term.

Former Boomers guard Brittany Smart was outstanding off the bench for the Flames, finishing with 18 points, while centre Lauren Scherf had 14 points and 11 rebounds.

On Friday night the Boomers fell to fellow title contender Canberra Capitals in overtime 76-75 and less than 24 hours later they were on court in Sydney but they didn't use it as an excuse, putting in a strong defensive game and leading for 34 out of 40 minutes.

The Boomers (13-6) move back to two games ahead of the Capitals (11-6) in second place and if Southside Flyers (14-3) beat the Capitals at Dandenong on Sunday that margin will be extended.

Magbegor praised the toughness of her teammates who split their two games while being without import point guard Lindsay Allen, who rested her troublesome knee in hope she can continue to play in the run-up to the semi-finals.

"We wanted to prove something and show we could back up after a tough loss last night and we showed we could do that," Magbegor said.

In the past weeks Magbegor, 20, has stepped up her production and taken more on herself when catching the ball in the post or within sight of the basket. She also knocked down a rare three-pointer on Sunday.

"We've had LA [Allen] out the last few games and we've all done a good job of stepping up," Magbegor said.

"It's different without her out there, but as a whole we are more aggressive. My teammates find me in the post and I just have to do a good job of rim running and sealing, then they will find me. I definitely have more of a scorer's mentality but I still look to find my teammates if a double team does come."

Stella Beck had another strong game as the stand-in point guard, while Monique Conti had some good moments off the bench.

But what will make the Boomers a true title contender is when the rest of the side take on playmaking roles and set each other up for baskets and how tightly they defend.

"I like our defence and how it's coming together," Magbegor said.

"I like seeing everyone step up. Stella had done amazing in the past few games, everyone has done a good job of stepping up and that's what I like to see."

The Southside Flyers host Canberra Capitals at Dandenong Stadium on Sunday at 5pm while the Boomers next game is against Townsville Fire in Townsville this Saturday night at 7pm AEDT.