A young Boomers outfit have overcome a nervous finish to retain the men’s FIBA Asia Basketball Cup with a 75-73 win over Lebanon in the final in Jakarta.

Australia never trailed and held a double-digit advantage for much of the match, but were outscored 30-19 in the last quarter on Sunday. 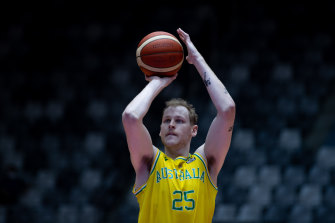 Rhys Vague at the free-throw line for the Boomers.Credit:Getty Images

They were up by as much as 16 in the second quarter and by 15 with just over six minutes to go, but Lebanon got within one point with just over five seconds left after a three-pointer from Cedars captain and star guard Wael Arakji.

Rhys Vague made one of two free throws to give Australia their final two-point victory margin, with Lebanon big man Ali Haidar off target with a last-second three-point attempt.

“We were playing well for a while and felt really good about how we were playing and keeping a lead – and next thing you know it’s a dogfight,” said acting Boomers coach Mike Kelly.

“I think in that fourth quarter we were just holding on for dear life and hoping that we could make some baskets as well and in the end we made just enough.”

Australia, who had a 6-0 record in the tournament, but were without all of their current NBA players, didn’t help themselves by making just eight of 21 free throws.

Arakji was held to six points in the first half, but scored 15 in the last quarter and finished with 28, hitting five of six three-point attempts.

Haidar was Lebanon’s only other offensive threat scoring 23 at 58 per cent from the field and proved hard to stop near the basket,

Maker and McCarron each made the tournament’s All-Star Five as did Arakji, who was named the competition’s MVP after averaging 26 points per game.

McCarron was the only player in the Boomers’ squad who also played in Australia’s 2017 tournament win.

“It just bodes well for Australia basketball that so many of these guys put their hand up to play for the Boomers and then did the Boomers proud, trying to keep up the same trademark that the Boomers have had for years and kind of cemented at the last Olympics,” Kelly said.

“So, super proud of the group.”