The Boomers will face off with top-team Southside Flyers at Dandenong on Saturday night before returning to the State Basketball Centre on Sunday evening to face the Perth Lynx.

In a condensed WNBL season, such a schedule is par for the course for the Boomers (7-2 win-loss) who have won their past three games and moved up to second place on the ladder behind the Flyers (9-1). 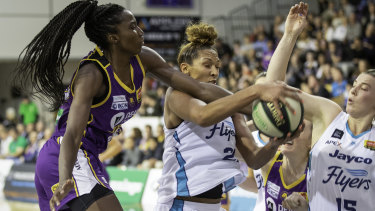 The Lynx, who were schedule to play Adelaide in Adelaide on Friday night, have made a slow start after an injury to WNBA centre Imani McGee-Stafford and the late arrival of import Ariel Atkins after she helped Washington Mystics to the WNBA title.

While both games will test how far the Boomers have come, it will also provide to individual tests for centre Ezi Magbegor who will face off with Flyers WNBA centre Mercedes Russell and McGee-Stafford on Sunday.

Magbegor was selected by Seattle Storm in this year's WNBA draft so she looks forward to the challenge after she starred in her side's win over Sydney University Flames last round with 20 points and two blocks.

"The challenge comes from their physicality and experience as coming from the WNBA they bring a lot more physicality to the game which is great for this league and for me as well," Magbegor said.

"Just being able to adjust throughout the game is important. If I can't take on someone down low then I can try to take them off the dribble, use my speed and athleticism."

Magbegor and power forward Cayla George have been exceptional in the past few games and will ask some big questions of the Flyers.

"As a team we have a big defensive focus and the little things like crashing the boards and being aggressive on offence – those have been big things for myself as well," Magbegor said.

Russell proved the match-winner for the Flyers in Adelaide last Sunday scoring a season-high 24 points and pulling in 14 rebounds so the Boomers will need to work hard to limit her impact.

But with the Flyers boasting talent across the court, Magbegor said her side had grown defensively since their 81-74 loss to the Flyers earlier this season.

"We had some lapses that night defensively and we've been together for longer now," Magbegor said.

"You can see the difference watching game film between then and now. We have come a long way since then."

WNBL home teams will continue to wear orange jerseys this round as the league throws its support around the United Nations' Orange the World campaign aimed at preventing and eliminating physical and sexual violence against women.

Southside Flyers host Melbourne Boomers at Dandenong Stadium on Saturday at 7pm (AEDT) then the Boomers host Perth Lynx at the State Basketball Centre on Sunday at 5pm (AEDT).

Liverpool vs Arsenal – battle of the second XIs: Who comes out on top?